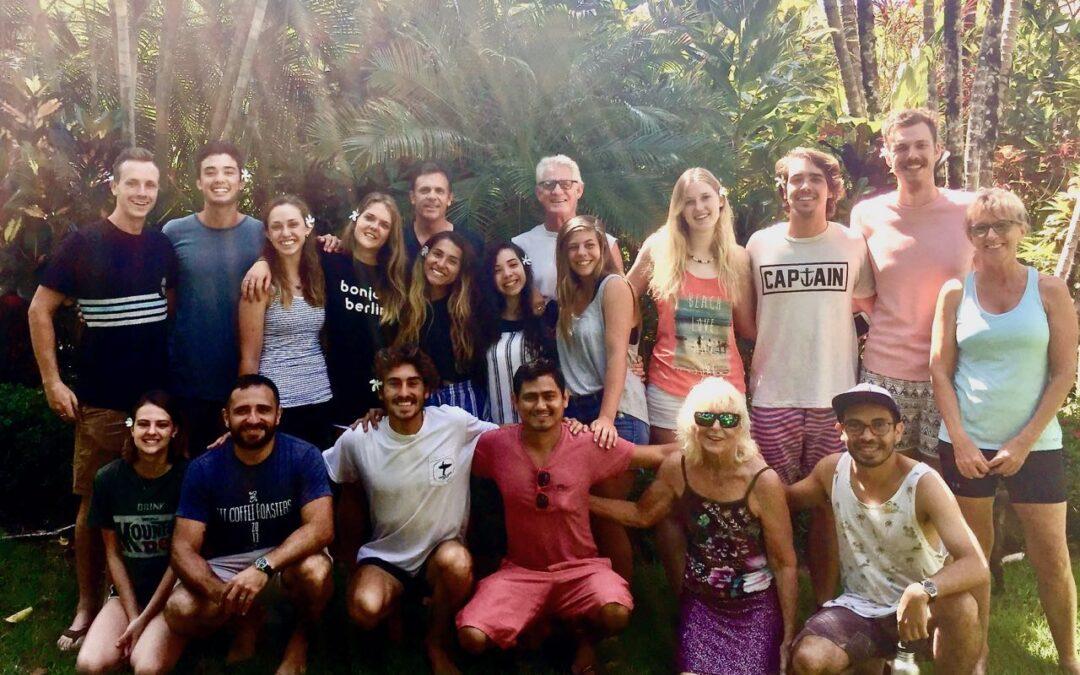 Leading worship at an outdoor church

Alyssa leads a group of HS Ticas in prayer

Tiffany speaking at The Collective

Greetings from the Nesbitt clan!

As summer mellows into fall, there’s a change of seasons overtaking our household. 2018 has been a banner year for our family, marked specifically by the end of our parenting journey as we’ve known it to date. It’s also brought an increase to our scope of ministry and a continuation of the Kingdom work to which the Lord has called us. Dig in for the details!

After nearly twenty-seven years of pursuing a family vision which has centered on making disciples in the lives of our kids, a shift is upon us. Our youngest son, Landon, graduated from high school on June 1, and we couldn’t be more proud! He and Alyssa spent the summer working as counselors at a Christian day camp in San Juan Capistrano, and by the end of summer they both exited the nest. Alyssa migrated back to Santa Barbara for another year of school, work and ministry, and we dropped Landon at his dorm at Grand Canyon University in Phoenix, returning to a much too-quiet house. It’s been a whirlwind summer of hosting, feeding, ministering to and loving on a plethora of high school and college kids, and with our two youngest absent, things are settling into a strangely uncharted calm.

Concurrent with the changes on the home front, our counseling / mentoring ministry has nearly doubled over the past few months! This translates to the majority of our expendable time being invested into the lives of men and women who are hungry to go deeper with Jesus. It’s truly one of our greatest joys and blessings to journey with those that the Lord brings into our lives, and we look forward to a continued increase in this ministry.

This spring we had the privilege of leading two ministry teams to Costa Rica, and we were thrilled to watch God move in powerful ways! During the last week of April we brought a team from our home church which consisted primarily of young adults, ministering for a week in churches, on the streets, and in a primary school. We also had the honor of building a home for a Tico friend of CRSSM who was homeless. It was a time of tremendous growth and stretching for the team as God moved in supernatural ways that were outside of many of our boxes, and we returned home overflowing with joy.

A few weeks later in May, Chris and Alyssa returned to Costa Rica with a team of students largely from Westmont College in Santa Barbara. In spite of the quick turnaround for Chris, this on-fire group brought renewed energy, joy and enthusiasm to our hearts and to CRSSM. The team ministered on the streets, at a high school and in several churches. Through both of these teams, we took great joy in witnessing numerous salvations, deliverances and physical healings, all of which were intertwined with fruitful and effective prophetic ministry. It would be our great joy to have you accompany us in the future! Please contact us if you’re interested in our upcoming 2019 trips.

Chris continues as the worship pastor at Heritage, pressing into his vision to train up the next generation of worship leaders. One recent highlight comes from our church’s 2nd annual “Three Nights of Worship” in July. This event was worshipful, well attended and also largely led by our own three co-leaders… Kylie, Tayler and Emma. We are believing for a flood of young leaders and passionate worshipers to be raised up through Heritage. We also believe that our heart to see God revive our nation, and more specifically our region, is intrinsically tied to a move of the Holy Spirit in the worship community, and we’re boldly asking the Father to move in unprecedented ways here in Orange County.

This summer Tiffany spearheaded the launching of a new ministry for the ladies of our local Body. The Collective is a bi-monthly gathering designed for woman to be truly seen and fully known, and is a ministry centered around the power of covenantal intimacy which takes place at both the table of the Lord and around every table at which we gather. The first Collective hosted almost 80 women and the testimonies were life-giving and powerful — lives were impacted and Jesus was glorified! Tiffany has hopes of seeing this ministry expanding to multiple churches in south Orange County.

In upcoming news, we are looking forward to a ministry trip to South Africa in February of 2019. JoshGen, a network of 20+ churches around Cape Town, has invited us to minister for two weeks, an honor to which we look forward with great eagerness. Tiffany will be speaking at a women’s gathering and also launching her Bible study, Bless. As a couple we’ll be teaching at a marriage retreat, training worship leaders and engaging in prophetic training. We’ll bring a small ministry team with us which may likely include both our daughters, Kylie and Alyssa — a great joy to our hearts! We’d be grateful for your prayers for this trip to South Africa and for the funds required to travel there.

Finally, we have to testify to the great goodness of our God! The past six months has been a season of supernatural provision in our lives, and our hearts are overflowing with thankfulness. After many years of sharing a car, we were blessed with the generous gift of a second vehicle just a few weeks ago, and it has been such a boon to our lives. Additionally, this summer a handful of faithful friends showered us with funds toward a long overdue vacation! In October we will be making a week-long trip to Hawaii, returning after 30 years to the spot in which we honeymooned as newlyweds.

And speaking of newlyweds, last month we were especially thankful to have celebrated the 60th anniversary of Chris’ parents! Verne and Diane continue to inspire and amaze us and are a source of encouragement to all who know them.

We’re so grateful for your continued love, friendship, prayers and support. Thank you for journeying in faith with us!

Three nights of worship at Heritage

Worship at The Collective