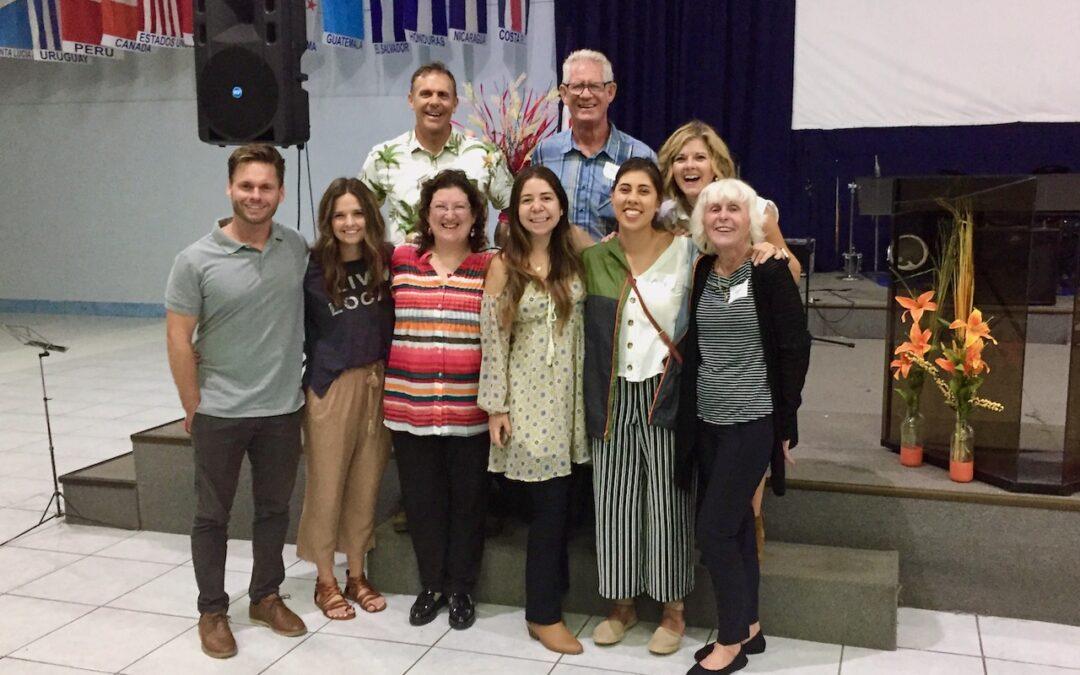 The chef and assistant preparing the 4th meal for 175 people

Fall has just begun to peek its head around the corner in Southern CA, but it heralds a host of imminent changes for our lives. As we look towards the close of 2019, we anticipate the next couple of months being marked by transition. We are also thanking Jesus for the great things which He has accomplished so far this year!

We want to first launch with praise! In mid-October, CRSSM hosted its third pastoral training conference in San Jose, Costa Rica, and the result was an incredible answer to prayer! We had the honor of bringing together approximately 170 pastors and ministry leaders from all over Costa Rica, and we were delighted to see their spiritual hunger and desire for unity. Even more so, we were thrilled to watch the Holy Spirit minister to their hearts in powerful ways. During the worship times and some of the teaching sessions, the Spirit moved so thickly that men and women lay on the ground weeping, basking in the love of Jesus.

The conference began with a call to the pastors to embrace their identity as sons and daughters of the King. We brought training on supernatural ministry (healing, deliverance and prophecy), issued a challenge to cultivate a greater corporate intimacy with Jesus, and concluded with an exhortation for leaders to become spiritual mothers and fathers, so that sons and daughters can be raised up into their destinies. We also provided “prophetic appointments” — sessions during the teaching breaks where members of our team gave prophetic words to each church. The testimonies from these times were breathtaking! One of the conference highlights came at the very end as we prayed over the chef and his assistant, both of whom received the Lord and were filled with the Holy Spirit!

Before leaving San Jose, we ministered at a church led by one of the pastors who attended the conference. It was a new connection for CRSSM, and we were blown away by the joy and power of the Holy Spirit which flowed through this band of believers at Embajadores del Reino (Ambassadors of the Kingdom). We fellowshipped late into the night as the pastor and his wife shared their personal testimonies — radical stories of salvation and deliverance. We came away grateful for this new friendship and impressed by the tremendous influence conveyed on this young couple for both their region and their nation. Please pray for a spiritual mother/father who can disciple, encourage and empower pastor Manuel Calderon and his wife to run wholeheartedly after the calling on their lives!

The effectiveness of the conference was confirmed by the many requests from the pastors for CRSSM to increase the frequency of these events. At this point, we are praying about hosting our next conference in July of 2020. We would greatly appreciate your prayers as we seek the Lord’s heart on this.

Now, for ministry on the home front.

We’re on the verge of transition! The past 9-12 months have been a time of intense prophetic communication from the Lord: one of those seasons of receiving frequent calls, texts and emails from friends all over the world who have essentially said, “I had a dream/vision about you… does this mean anything?” The common thread running through it all has been that we are about to move into a new season, one which includes the fulfillment of some of the promises we’ve been carrying in our hearts for years.

More on that at a later time. For now, we’ll jump to the punchline and share that in late September, Chris gave his resignation at Heritage, effective the end of 2019. Chris currently serves as pastor of worship at Heritage which is a part-time, paid position. In addition, we serve as counselors /mentors and also lead a missions organization (CRSSM) which we co-founded in 2015 — all of which are volunteer efforts.

After much prayer and fasting, we realized that while we prefered for God to lead us into this new season by miraculously opening a door of opportunity, He seemed to be speaking otherwise, calling us to take a step of faith. Chris stepping down from his paid position at Heritage was, we believe, our first act of faith; we intend to keep taking faith-steps forward.

The Lord has continued to stir our hearts towards a resounding theme — that of serving as a spiritual father and mother for the young adults who are passionate for revival in the Santa Barbara area, and raising up leaders in that movement. We have such an excitement in our hearts regarding this call, and we are confident that this is just the beginning of what the Lord has in store for us, as He has also been speaking about moving us into an apostolic role, casting vision for these emerging leaders.

We are currently asking the Lord for specific confirmation in regards to income and housing. We dearly covet your prayers as we trust Him to meet every need, and we look forward to keeping you updated on all that the Lord is doing in this new season!

Noe interprets as Chris teaches on cultivating intimacy in our churches

The chef and assistant receive Jesus and get filled with the Holy Spirit!